Greg Smith is a serious and experienced backpacker and adventurer. He has enjoyed the outdoors since he was young, even as he progressed through his career in the IT field while working in different cities around the United States. Now, in his retirement years, his main focus is to continue exploring the beauty of new mountain vistas, expanding his physical capabilities, and successfully conquering the unexpected along the way. His experience with technology has provided him with an edge in integrating new ways to use mobile technology like GPS devices, smartphones, and other smart devices in his planning for backpacking trips. Planning and using technology became a key survival tactic on one of his past trips.

In December 2015, Greg headed out on a solo backpacking trip on the Lost Coast Trail in the King Range National Conservation Area of northern California. The forecast called for a few days of rain with moderate wind conditions but he felt properly prepared for the trip overall. In addition to getting a waterproof paper map of the area, Greg also loaded the map in the Avenza Maps app on his smartphone. Some additional preparation was needed to get through several high tide hazard stretches of the trail and required some attention to tide tables. 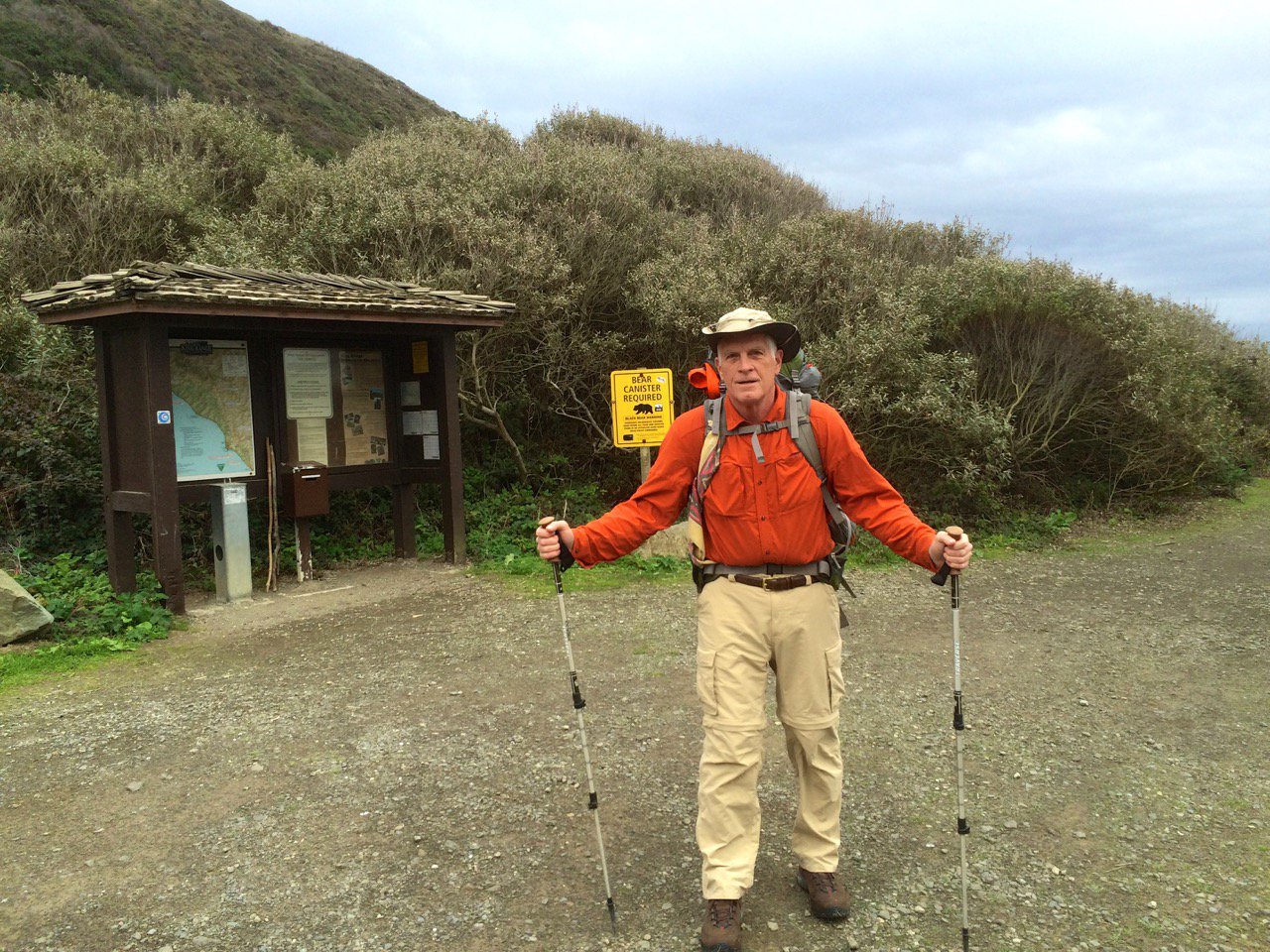 Unfortunately during that time, even the low tides were high and caused Greg to barely get through the first stretch of the trail that required navigating over dangerous and slippery rocks while contending with large ocean waves. With Greg’s experience, he felt it was too dangerous to pass these sections of the trail with higher than normal tides so he decided to change routes and climb the Spanish Ridge Trail (an increase of 2400 ft in elevation) and then take the Cooskie Spur Trail towards his destination. This is where the forecasted rain and wind conditions became a factor. 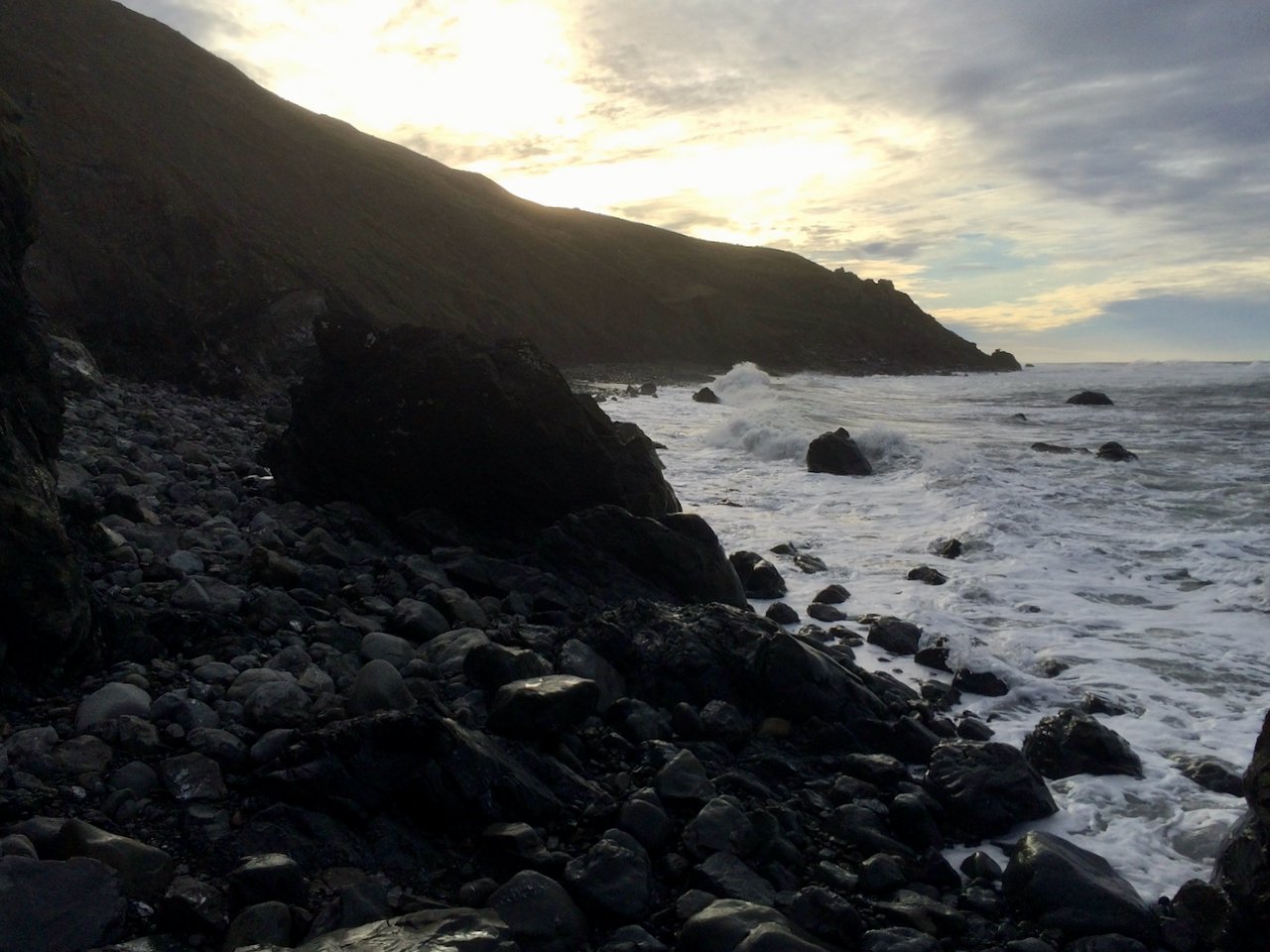 Rising tides making this section of the trail very challenging.

Of course, the human spirit doesn’t just give up, I had to do something because my current situation was hopeless.

After completing about half of the Spanish Ridge Trail, he encountered very strong winds and torrential downpours. Greg shared on his blog, “I was actually blown off my feet, and I was a 250 lb object. I was totally exposed at this point, no trees or large rocks to shelter behind, so I laid face down next to a small rock that gave my head a little relief. I was pinned down for about 45 minutes with the wind occasionally lifting me when it hit between my body and backpack.” However, the real danger was the quick onset of hypothermia. “What was a bit fascinating from being in this predicament was getting a taste of what it may be like to face the real possibility of death so my conversation with God was with great urgency. Of course, the human spirit doesn’t just give up, I had to do something because my current situation was hopeless,” Greg added.

After assessing his situation, a heavy fog began to roll in and it became difficult to know what was ahead on the trail and which direction was the correct one. Pulling up the map on the Avenza Maps app and using GPS to locate himself assured him that he was at least on track. While fighting the extreme wind, rain, and dropping temperatures, Greg found his fingers and legs becoming very cold and it became difficult to button up his shirt or retrieve something from his backpack. He needed to reach a safe point to set up camp as the evening was approaching. With another grueling three hours of hiking, he reached the Cooskie Spur Trail and found a sheltered spot along a ridge of trees and set up camp. After changing into dry wool clothes and warming up, he was thankful that he made it and got some much-needed rest. Greg continued to use the offline map location capabilities of Avenza Maps and successfully completed the remainder of the hike without any issues. 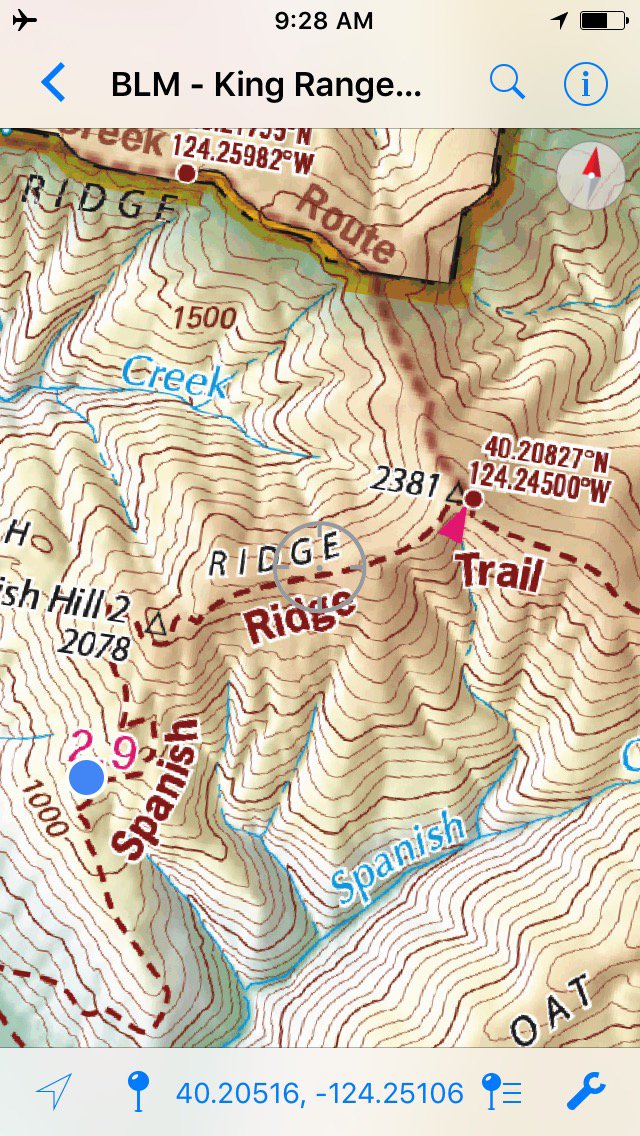 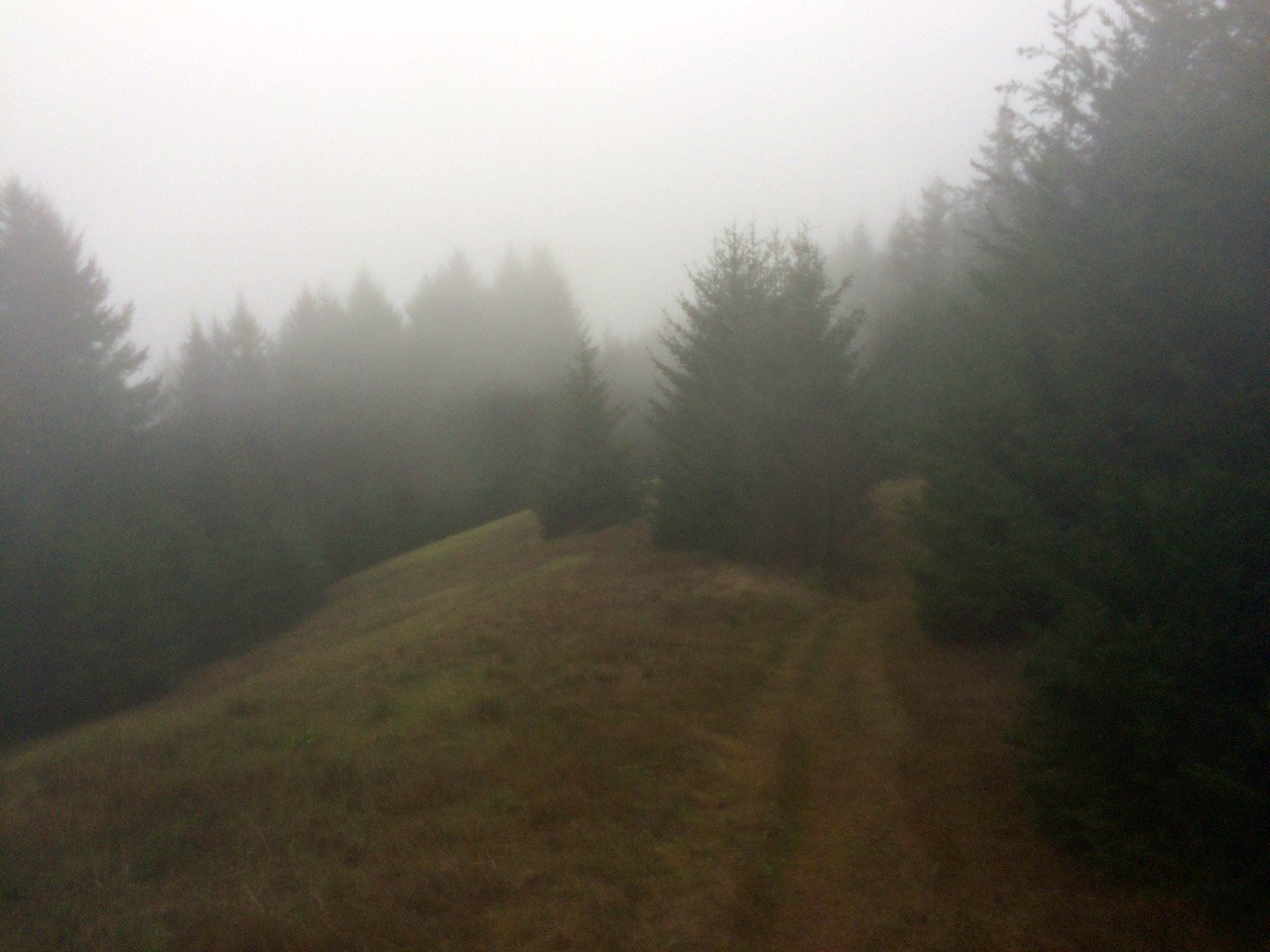 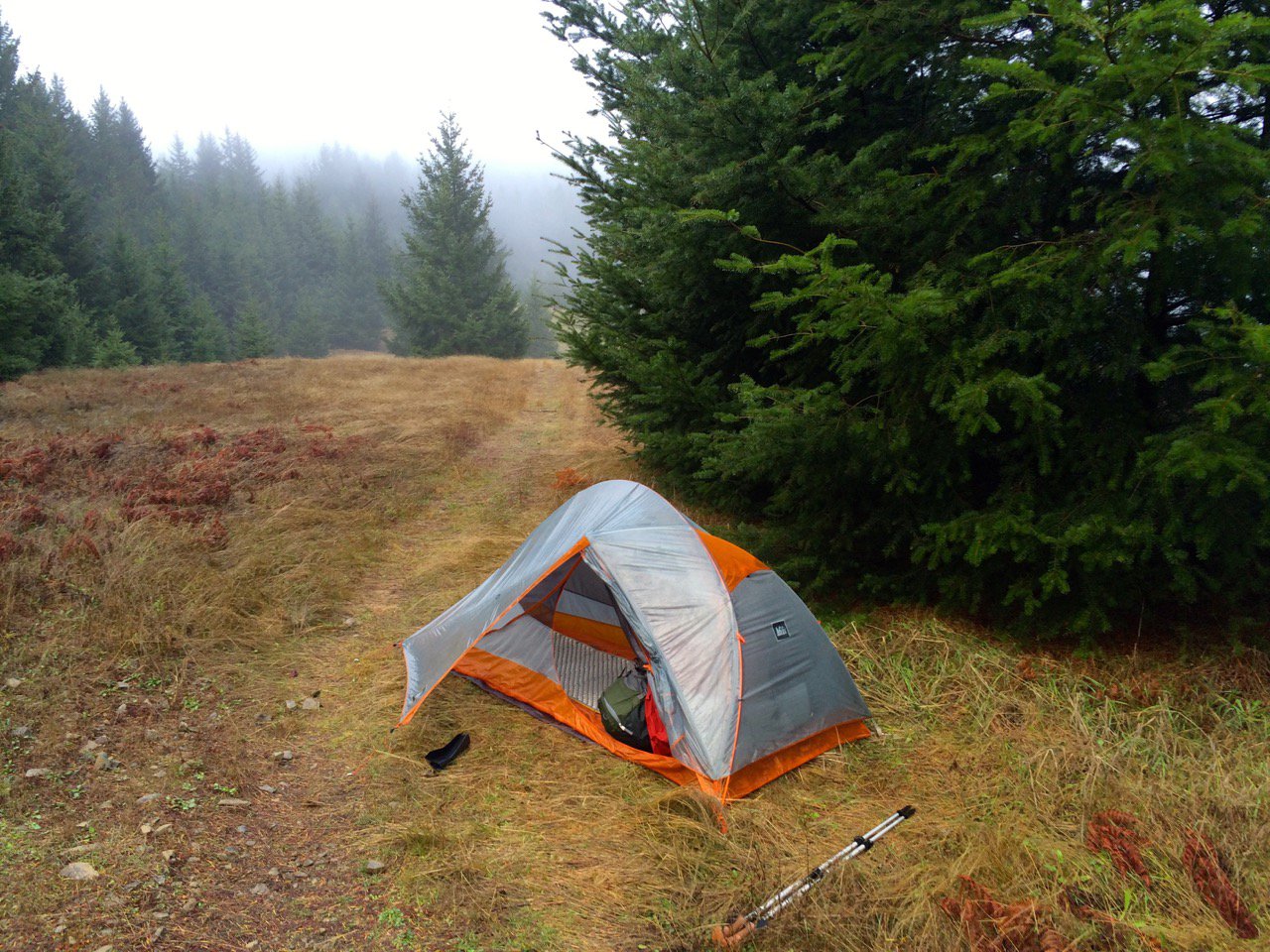 Found a sheltered spot along a ridge of trees on the Cooskie Spur Trail.

Avenza has been an integral part of my backpacking career and in retirement. It played a role in saving my life because I never could have found the trail with those typhoon-like winds without Avenza Maps.

In February 2022, Greg returned to hike the Lost Coast Trail again and used Avenza Maps to mark waypoints with photos to help him document where he thought something occurred from the 2015 trek. He added, “Avenza has been an integral part of my backpacking career and in retirement. It played a role in saving my life because I never could have found the trail with those typhoon-like winds without Avenza Maps. Throughout the years I will always try to have a map loaded on Avenza Maps and will use it as my main navigation but also as a backup to several other apps. I tend to venture off the main trail, so I need more expansive maps to help, which I usually can find on the Avenza Map Store.”

You can read more about Greg’s adventures on his blog at The Adventure Continues. 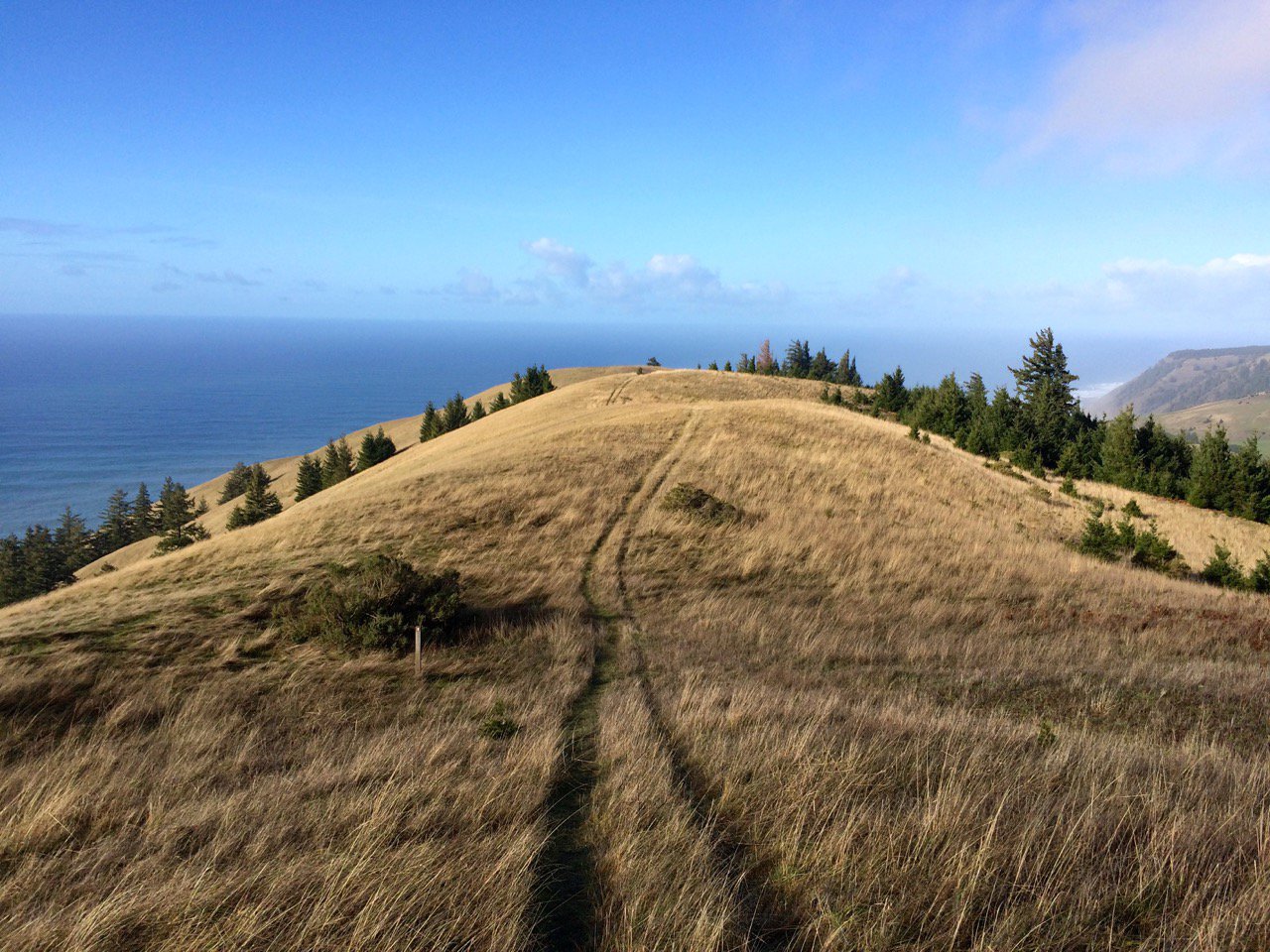 Returning to the Lost Coast Trail with amazing weather.